In 1896 Manchester silk merchant William Gaddum purchased four plots of farmland for the purpose of building a summer house in the Lake District for his family.  A local Architect named Dan Gibson was appointed to design the Arts and Craft style house and Thomas Mawson, a Landscape Gardener, worked alongside him designing the formal gardens.  Mawson said, “Gibson was entirely responsible for the design of the house (including the stables and the outbuildings), while I arranged the terraces, gardens, entrance drives and plantations”.

In 1899 William and his wife Edith, a double cousin of Beatrix Potter, moved into Brockhole with their two children, Walter Frederick known as Jim and Elizabeth Margery, known as Molly.

Although originally built as a holiday home Edith made the permanent move to Brockhole, whilst William continued to spend some of his time in Manchester working for his family’s company, Gaddum and Co.

The driveway curved its way up from the main road through a gated entrance to the front door of the house which is situated on the left-hand side as you enter the Visitor Centre. On the ground floor, there was a dining room, drawing room, billiard room, a library, a smoking room, workshop and servants’ quarters.  The family used the rooms at the front of the house the most where they could enjoy the views of Windermere, the Langdale Pikes and Claife Heights.  The walls on the inside of the house were lined with wood panelling and the staircases had hearts carved into them in the Arts and Crafts style. 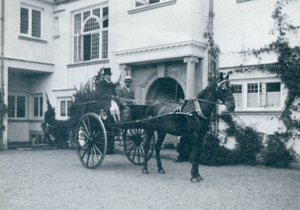 The house had no running water when it was built; water was drawn from a well in the kitchen courtyard with a gauge on the wall showing how much water was stored in lead-lined tanks in the roof of the house.  The Orangery, which visitors can sit in and enjoy today, had tanks buried in front of it to collect rainwater from the gutters; this was then used to water the flower beds close to the house.

A summer house was built in the gardens and a flat area of ground was laid out as a games lawn and a place where William and Edith could host tea parties.

The Gaddum’s son Jim was born on 7 April 1888 and educated at Eton and Cambridge before joining the Westmorland and Cumberland Yeomanry in 1914, with whom he served throughout the war in France, gaining the rank of Captain.  In September 1918, he married Benita Fisher; one of the guests at the wedding was Beatrix Potter.  In 1943 he became the High Sheriff of Westmorland and then the Deputy Lieutenant of the county in 1946.  He lived in Kendal with his wife until his death in 1956 and was buried at Troutbeck. 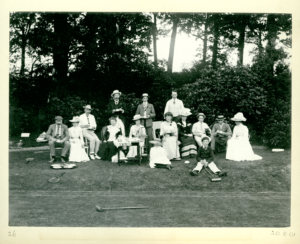 The Gaddum family enjoying tea on the lawn

William and Edith’s daughter Molly was born 4 years after Jim on 23 January 1892.  In 1912, at the age of 20, Molly married John Payne who was 15 years her senior.  When war broke out in 1914 John served with the XVI Manchester’s whilst Molly returned to live at Brockhole.  After the war, the couple settled at Elm Lodge, Ludlow and had a son, John Walter, in 1919.  When John died in 1951 Molly lived with her son and his wife until her death in 1973.

On 3 February 1936 William and Edith celebrated their Golden Wedding Anniversary at Brockhole.

Edith Gaddum died in 1937 and the following year William married Agnes Vey, a widow who lived at the adjoining property.

William Gaddum died on 19 January 1945 and Brockhole was eventually sold to the Merseyside Hospital Board in 1946.  They converted the house into a convalescent home for 25 women, with much of the Arts and Craft interior being removed.

In 1966 the Lake District National Park Authority purchased the estate for £65,000, with a grant from the National Parks Commission and in 1969 Brockhole opened as the first National Park Visitor Centre, welcoming 40,000 visitors in its first month.

Today Brockhole is one of the most highly visited attractions in the Park offering a true taste of the Lake District, from family activities to stunning gardens and grounds.

The beautiful Brockhole House is now home to The Gaddum, allowing our visitors to enjoy the company of guests just as the family loved to do so much when it was their home.

Keep up to date with news and special offers here at The Gaddum by signing up to our monthly newsletter.